When the polemic against the Internationalist Group (IG) on the war in Ukraine was published in Spartacist (English edition No. 67, August 2022), the IG had a contradiction. They advocated revolutionary defeatism in the conflict, but their actual practice ran counter to this formally correct position. This is precisely what our article exposes. Since it was published, the IG has resolved their contradiction. Unfortunately, they have done so not by coming over to a truly revolutionary position but by going over to the overtly reactionary position of supporting Russia in the war.

In a 22 October article, the IG now claims that Russia is waging a just war of national defense against the imperialists. According to them, the conflict is no longer about who will dominate Ukraine—the Russians or the NATO/EU imperialist powers—but about the imperialists seeking to “defeat, destroy and dismember Russia.” The IG goes all the way with this position, equating the task of communists toward Russia’s “Special Military Operation” (SMO) with Trotsky’s opposition to the imperialist rape of China by Japan and the Italian invasion of Ethiopia. How does the IG justify this absurd position? They argue that the support by NATO to Ukraine “has reached the point where quantity turns into quality” and that the Ukrainian army has become “in reality an extension of NATO.”

These arguments shatter at first contact with reality. It is in fact fairly obvious that nothing fundamental has changed since the outbreak of the war. Ukraine has been a proxy for the imperialists going back to 2014. Imperialist weapons flooded Ukraine at the very outset of the conflict and military operations have been coordinated with NATO throughout. The IG goes into interminable detail over this or that weapons system, speech or act of military cooperation to “prove” that Ukraine’s offensive in September marked a qualitative change. But let’s be concrete. In the current context, what would a victory by Russia represent? Just as in February, it would mean the national oppression of Ukrainians by Russia. And a victory by Ukraine? It would mean the “freedom” for the imperialists to pillage Ukraine and the oppression of Russian minorities within Ukrainian borders. Again, the very same result as posed at the start of the war.

A “destruction” and “dismemberment” of Russia is simply not posed in the current context, no matter how successful Ukrainian forces are on the battlefield. This would become a real question only through a gigantic escalation by the imperialists, which would have to include direct military confrontation with Russian armed forces. If this happens it won’t be necessary to sieve through obscure diplomatic statements or defense agreements to understand that the nature of the conflict has changed. It will be very clear, and defense of Russia will be posed.

The central issue with the IG’s position isn’t, however, its flawed analysis but the reactionary programmatic conclusions that flow from it. According to the IG’s position, Ukrainian workers must fight for the victory of Russia and facilitate Russian advances in Ukrainian territory, i.e., fight for their own national oppression. And the Russian working class? It must mobilize in support of the war and fight the Russian ruling class for not waging total war in Ukraine. Instead of organizing the most advanced Russian workers—those who are opposed to the predatory aims of their ruling class in Ukraine—the IG’s position reinforces the extreme Russian chauvinist voices which criticize Putin for not having committed enough resources to the war.

Taking a Trotskyist stance on a given war does not mean simply opposing whatever side the imperialists are backing. One must approach the question starting from the struggle for international socialist revolution. The IG’s position is an obstacle to mobilizing the Russian and Ukrainian working class for a revolutionary outcome to the conflict. It is equally counterposed to fostering socialist revolution in the rest of the world. In countries oppressed by imperialism, it reinforces the illusion that anything done against U.S. interests is necessarily progressive, even reactionary military interventions such as Russia’s SMO. In the imperialist countries, it fundamentally undermines the argument for opposing the aims and actions of NATO and the EU in the war. For example, the IG’s argument as to why workers should oppose weapons shipments to Ukraine are based not on the true crimes of the imperialists but on the blatantly false claim that the national sovereignty of Russia is under attack. Whether in Ukraine, Russia or the rest of the world, the IG’s position does not drive a wedge between the objective interest of the working class and the social-chauvinist program of its leadership. Rather, in each case it can only cement the subordination of the working class to the bourgeoisie.

We can only speculate as to what prompted the IG to change its position. One thing for certain is that this line change was not provoked by a “qualitative” change in the situation in Ukraine. Far from our minds is the assumption that the modest polemic we wrote this summer might have influenced the IG toward taking a more consistent position. We do, however, note that the IG’s line change article touches on many of the very questions over which we criticized the IG in our recent Spartacist, without ever answering our arguments. Certainly, a coincidence. 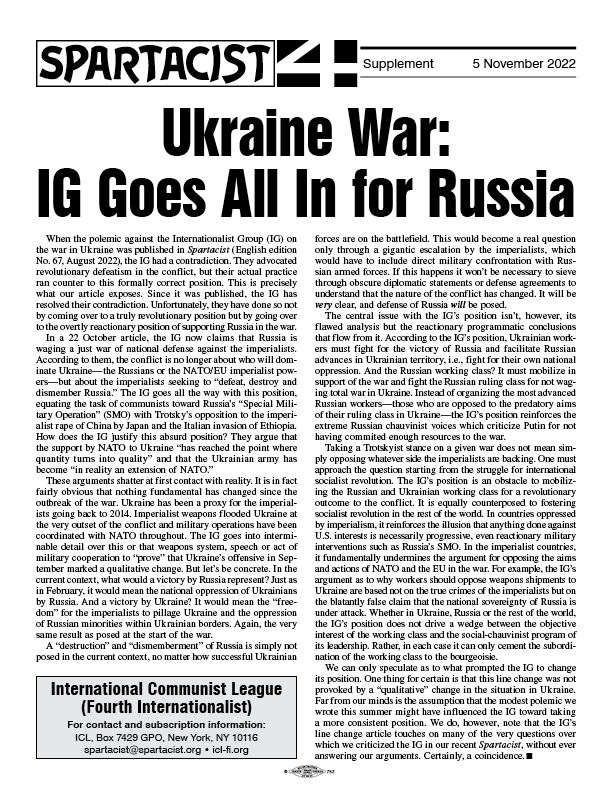